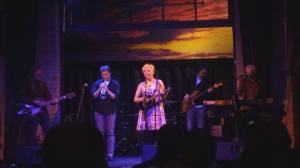 celebrated her birthday with a fundraiser for the Leukemia and Lymphoma Society called Songs for Juliet, a tribute to her mother. She was kind enough to invite everyone. It was also a sneak preview of her upcoming CD, which was a treat.

Vernon’s catch phrase is “sad songs on a happy instrument”; the show last night was a demonstration of that marriage of opposites. She has a very upbeat persona, slightly self-deprecating, wears light-up shoes and plays the ukulele, while her songs pull hard at the heart strings. I heard this especially in Heart is in Your Hands, a song for her daughters Lily and Daisy; it’s a sweet slower song with an added emotional aspiration in her voice last night. Very touching.

Somebody’s Daughter is apparently a song in progress, written for the powerful women in her family. It showcases her clear voice highlighted with slight modulation. Vernon has a strong, very pretty voice. The deceptively upbeat nature complements the dark humor of a song like Five O’clock – a song about her own battle with alcohol, which she is wining. Taking the old phrase – it’s 5:00 somewhere – a phrase that usually conjures a gregarious image of folks on vacation or in the pub together and putting it on the face of a young mother at home is realistic look at what motherhood and life with alcohol can look like. There’s an important backdoor to feminism in the song; an example of women in art owning the things that are hard for women today.

It was great to see her with the full band. The band gives a range of genres that one instrument just can’t do. Look to the Sea has a bold festive feel, Undertow has a twang and some songs have a feel of old radio shows. The horn especially is a great counter to her voice – both loud and strong but different. I loved the keyboard in Lily, it sounded like a xylophone. Lily, about Vernon’s daughter, was a song that caught my ear because my oldest daughter is named Lily, after Pictures of Lily. But I think I’m going to tell my Lily that I named her after this song, it’s much more mom-approved.

The night began with Home Fires, a duet of Vicky Emerson and Sarah Morris. I think it was Morris who used a phrase that captured a theme for the night. She mentioned how glad she was to meet other moms who were musicians – a creature to her that seemed as rare as unicorns. So they sang for the unicorn moms. That feeling isn’t restricted to musician moms.

The Home Fires sounded great. Their voices blend well together. If theirs voices were a painting Emerson would be the green of the grass with Morris the blue of the sky and together the picture is richer. It’s tough not to like a songs like Front Porch about kindness and wine. Ad added bonus was ABBA-solutely, Vernon’s ABBA cover band. Nothing will take you back to be 10 years old faster than an ABBA song.