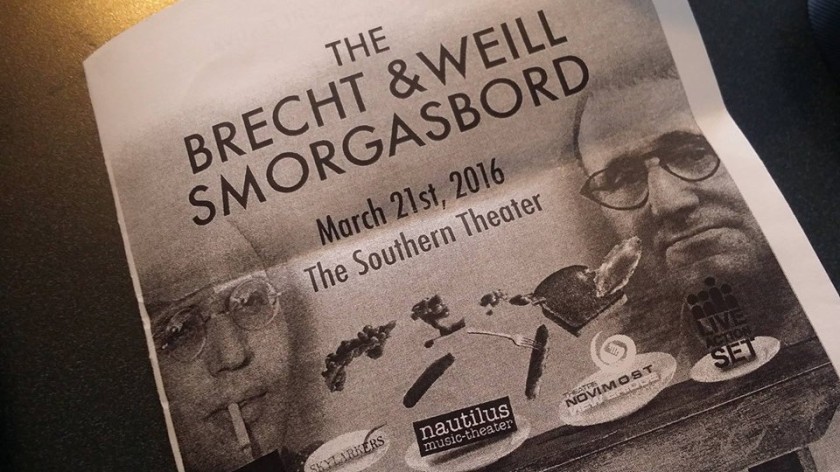 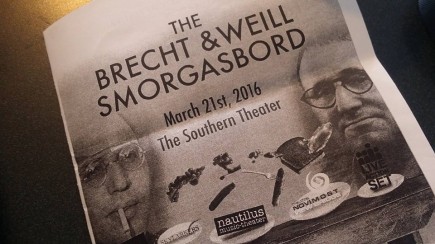 I love a show that teaches you something surprising. Last week I learned that the line “show me the way to the next whiskey bar” from The Door’s Alabama Song is actually taken from the lyrics of a song written by Bertolt Brecht and composed by Kurt Weill.

That’s what I learned at the Weill-Brecht Smorgasbord performed March 21 at the Southern Theater. Sadly, it was a one-night only event. Happily it was well attended and deservedly so. Presented by University of Minnesota Theatre, Music and German Studies departments, it was a vaudeville approach to showcasing some of the lesser works of Kurt Weill and Bertolt Brecht. Weill is a composer – perhaps best known for Mack the Knife. Brecht is a playwright known for absurdist show such as the Good Woman of Szechwan and Chalk Circle.

The next whiskey bar line comes from the Mahagonny Songspiel, which was performed by the University of Minnesota Opera Theatre. It was song and played in turn. It’s a dark and silly opera – as only Brecht can be. It was a rare treat to hear such an intimate performance. And the operetta was only one fifth of the show.

The show began with the audience on stage – a move that will always scare me to pieces. But really we were just led to our seats through poetry. Very immersive but painless and interesting to hear the different renditions of the same lines from Brecht’s City Dwellers as given by Live Action Set. Funny to hear how friendly, sarcastic and menacing one line of welcome can be. Maybe picture your mom, dad and grandma all inviting your weird uncle to stay as long as he wants; the intention is all in the inflection.

Theatre Novi Most did a bleak rendition of The Downfall of an Egoist. Bleak referring to the social commentary, not the acting. They did a great job with sparse props which clearly center the action on a battlefield but leave enough to the imagination to make an easy metaphorical transfer to more every day locations. There’s a gruesome solidarity building as they play a Russian Roulette of sorts – and realize there will be no winners.

At the opposite end of absurdism, the Four Humors Theatre performed a very immersive version of The Elephant Calf. I am relieved to report that I was a seat away from one of the two unsuspecting audience members brought up on stage. (And I owe my less lucky friend a beer for taking one for the shier side of the team.) The story and the performance is reminiscent of the Rude Mechanicals show in Midsummer Night’s Dream – funny, bawdy, a little uncomfortable and meaningful. Props to the performers dressed in sheer white, jumpsuits with plenty of give. I will find a way to see the Four Humors again.

Finally the Nautilus Music-Theater sang water songs – show tunes about the Mississippi. An absurd ending to an absurd show – but just the right size and taste for the grand finale.