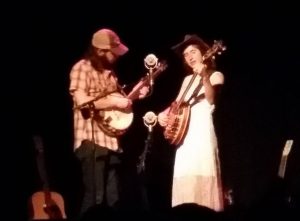 Some musicians seem to take years, even decades, to release a CD so why has The Lower Pair released two at once? Because each release is like a chapter of their lives and holding onto one would put them out of synch with their fans. They’d be several chapters ahead of the audience. Turns out the prolific impatience of The Lowest Pair is our good fortune.

We got a taste of both Uncertain as It is Uneven and Fern Girl & Ice Man on Thursday night at the Cedar Cultural Center. And if you hustle you can get a taste on Friday (April 29) at 5:30 in Winona at the Midwest Music Fest. (Depending on the drive, I just might catch them there too.)

The Lowest Pair is a duo – Kendl Winter from Arkansas and local guy Palmer T. Lee. They both play banjos. It’s tempting to say dueling banjos but really the banjos aren’t dueling, they’re playing really well together so well that it can be difficult to tell who is playing what. The mingling is aided by the fact that they share big old school radio-looking microphones.

Their voices marry as well. Winter has a very aspirated, breathy voice and timing as quickly yet spot on as her demeanor. Lee more constant and bring a host of instruments to the stage – playing banjo, harmonica and guitar. Lee seems to take the lead on a song like Mason’s Trowel, which is a more rocking song – well rocking Blue grass style – toe tapping. The Sky is Green is a good showcase for Winter’s voice and unusual perspective. She has a blue grass voice. Just the comfortable side of scratch and compelling to make you listen closer to see what she sings next. A testament to the song writing, her voice representing the stories.

Other stand out songs – Like I Did Before and Living is Dying, which isn’t on either or the new releases but a great song!