Yesterday I happened upon a red dress down near Wita Tanka in a spiritual place with hand-written signs from loved one. It was sad but I was glad to see it there; glad to see it in a place where people had to take notice.

The Red Dress is a symbol, a reminder of Missing and Murdered Indigenous Women, Girls and Two Spirit (MMIWG2S). This demographic shoulders a disproportionate weight of violence and abuse nationally:

And specifically in Minnesota: 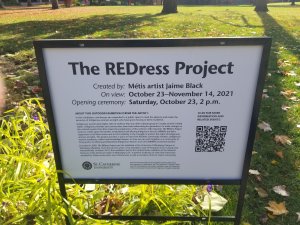 Today I heard about and visited The REDress Project at the Catherine G. Murphy Gallery, on the campus of the University of St Catherine. (On display until Nov 14, 2021.) There are dozens of dresses hung in the trees in the quad, which is the center of the campus. Each dress is unique, but they are all beautiful and they are all red. There are prom dresses, summer dresses, everyday dressed, work dresses – in all shapes and sizes. The style of the dress doesn’t matter, it’s the fact that the person wearing it was in greater danger because of their heritage, because of their looks, because of their location and because so little attention is given to this plight on our community – by our I mean Minnesota, US and world.

It’s difficult not to imagine the person or child who wore each dress. You know some of this girls would be fun. You know some would know exactly who to call to get a job done. Some woke up early and some stayed out late. The toddler-size party dresses are the most heart breaking. Think of how innocent and loving a toddler can be and to think that they are made more vulnerable by being Indigenous.

The statistics are staggering and the stories are heartbreaking. I have been to rallies featuring victims and loved ones who have been hurt by the loss of women in their lives. Minnesota formed a Task Force to write a report on the issue. That report provides a blueprint for improvement and spurred the creation of state-funded Missing and Murdered Indigenous Relatives Office. Steps are being made but there’s a lot of ground to cover. What most of us can do is – be aware. If you see something, report it. If you see art that reminds you of Missing and Murdered Indigenous Women, Girls and Two Spirit (MMIWG2S), share it with someone who might not know. It can be your nod to November, National Native American Heritage Month.