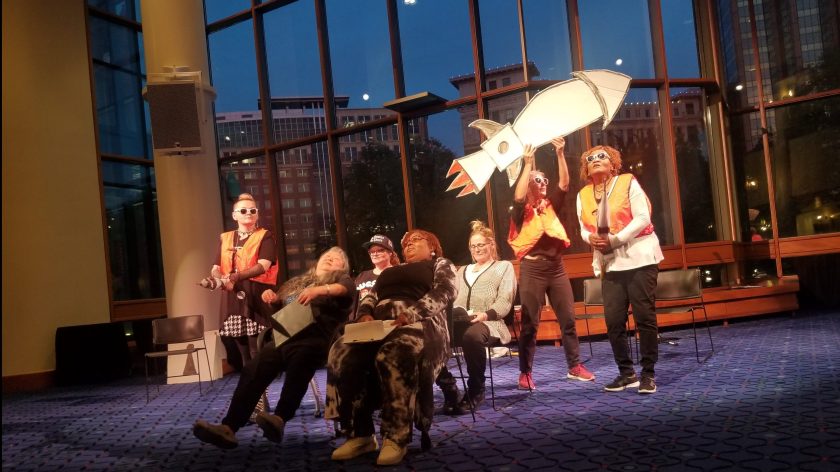 zAmya Theater company includes members with experience in homelessness, either through work, having experienced homelessness or a strong interest. Their powerful combination of lived experiences and artistic expression educates and advocates for housing justice for all. (We spoke with troupe members during the pandemic.)

Tonight they performed at the Ordway’s new program, At the Intersection where they explore the intersection of performing arts with cultures, communities, professions, and organizations in Minnesota and around the world. There were two distinct acts, a recreation of their work The zAmya Zone, a clever take on the Twilight Zone’s How to Serve Man where people experience homelessness are tricked into signing up to going into space. It turns out, and they show the math, that it would be cheaper to send unhoused people to space with Elon Musk than get them housed. It was clever and it brought the ridiculous to life especially as they compared earlier iterations of sending people to space – via boarding schools, reservations, jails, health facilities and other places that can be as inescapable.

The second act was a new performance,  A Challenge to Change, which was created over the last year with residents and clients of Dorothy Day in Downtown St. Paul. It was community storytelling. Each member took a moment to tell their tale while the troupe performed it. Music, chorus, recurring motifs and poetry brought it all together but at the heart of the matter were the stories. The performers were brave and generous with their stories and there was something in each story that touched someone in the crowd. There was a young woman who told about keeping a tent under her bed at the shelter, just in case. Others were found that just once incident, one health issue was the difference between housed and unhoused.

They also spoke about the importance of zAmya to their mental health, sobriety and sense of community. Several mentioned that they came for the “free gift card” but stayed for the friendship. Discussion was encouraged between acts; in our area we spoke a lot about accident of birth. Recognizing that the most important factor in being housed is your birth reminded that we have to do better for everyone!