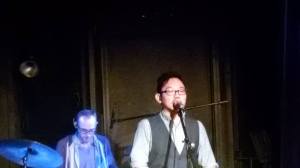 Originally from Minnesota, Paul Michell moved to New York where he began working on his third album, Break the Fall. He returned to play the Bryant Lake Bowl on Wednesday night.

Michell is a singer, songwriter and piano player/keyboardist. It’s great to see (and hear!) two genres of keyboards on one stage.

The show had a timeless yet updated pop appeal – pleasant voice, lots of passion and universal themes. The songs tell a story and the performance has a cheerful drama about it. I should have brought my middle (teenage) daughter with me; it is exactly the music she would love.

Counting Sand reminded me of some of the love songs from the 1970s but with an updated electronic feel. I also enjoyed some of Michell’s older work. I was struck by how Breathing Under Water (the song, not the practice) really suited Michell’s voice.

He’s fun to watch as he looks as if he’d like to be dancing to the music almost as much as singing. Also only in a live show can you hear about the connection between a song like These Days and the current election. A connection Michell mentioned and made the restrained song refraining “I want more” all the more poignant.