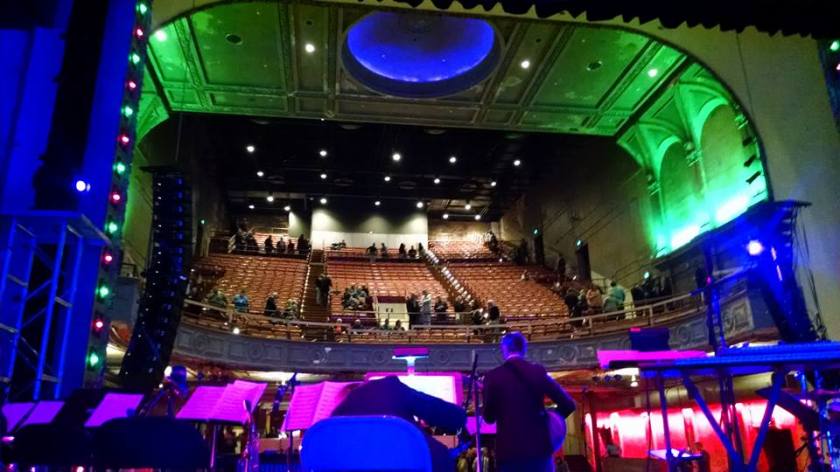 The New Standards were great – they played a wide range of music – Suburbs, Christmas carols, Daft Punk. And they came with a star-studded, local entourage – Jeremy Messersmith, Aby Wolf, Cameron Kinghorn, Janey Winterbrauer, Mayor Coleman and more. I am a sucker for Fairytale of New York, always love Bizarre Long Triangle, but Nancy Sinatra’s Boots may have been my favorite song on the night.

The music, a nod to multiple eras and genres, got people dancing in a space that deserves to be appreciated! And really the building was the star; this really was a sneak preview of the Palace.

It’s shabby chic and majestic, charming and elegant all at the same time. The seats were removed from the main floor, leaving space for a dance floor and a couple of bars but the balcony is still raked seating. The décor has been restored to the original and left with a feeling of ASIS. You can see the detail of the original ceiling beams, although the few beams entirely traverse the room now.

The “New Palace Theatre” originally opened in 1916, featuring live acts. In 1922, the name was changed to the Palace-Orpheum, because it became part of the Orpheum vaudeville circuit. Eventually the name shortened to Orpheum despite the fact that movies replaced live shows. In the 1940s, the theater got a serious face lift and became the RKO Orpheum.

My mom was a frequent visitor to the RKO Orpheum, not in 1940 since that predates her, but by the early 1950s. She didn’t come to the show on Friday night, although based on my pictures, she says the balcony looks just like it did back in the day.

It will be fun to see the impact that the theater has on life downtown. It’s just a block away from the Amsterdam, which has done well for a St Paul live music venue since 2011 and across the street from Vieux Carre, a newer jazz club in the lower level of the Park Square Theater. St Paul is shaping up!