It’s one of our favorite traditions – chasing down record store day and trying to beat our best score of record shop sin a day. We failed miserably this year but we have some good excuses. Aine had a class until 10:30 and I have a party at Paisley Park at 6:00. But between those hours we hit 11 record stores that were open and did a drive-by of one that shut in the last year. Super bonus – it was gorgeous today – unlike one week ago when it snowed almost a foot.

So here was our agenda –

Agharta Records – St. Paul
2512 University Ave W, St Paul, MN 55114
Free chocolate cake! And it was tasty. Aine pointed out that she knew she was growing up because the cake tasted better to her than the frosting. Luckily, I’m not that grown up; I ate the frosting. They have a good mix of new and used albums.

11:00 Hymie’s Vintage Records – Minneapolis
3820 E Lake St, Minneapolis, MN 55406
We timed this especially to see Charlie Parr perform on the outdoor stage. It felt like summer for the first time in long time. Hymies has music indoor and out all day long. They actually manage a whole block party. All they need is about 3 more doors in and out to handle the crowd. Bonus – they have free records for the taking. 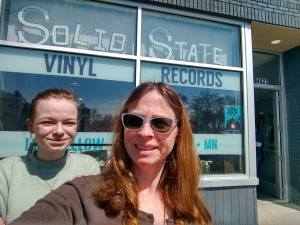 Solid State Vinyl – Minneapolis
4022 E 46th St, Minneapolis, MN 55406
I don’t think we had been here before. The folks at Solid State were very friendly and the place is bright and feels new. Bonus you don’t find in all records store – no special smell.

Dead Media Records – Minneapolis
1828 E 35th St, Minneapolis, MN 55407
Music out in the back, a ping pong table, a spin wheel of prizes from Radio K and two floors of music. We bought 5 cassettes because Aine was so enthralled with them. Luckily my car plays tapes. SO now we have a homemade Led Zeppelin, Patty Smyth, David Bowie and some other hot 80s options. It was a good opportunity to learn about how tapes work and how they were a game changer for musicians in that it made it possible for a band to produce a piece of music to sell. That idea was pretty foreign to Aine.

Roadrunner Records – Minneapolis
4304 Nicollet Ave, Minneapolis, MN 55409
It’s a pretty serious record store. You can get some rare treats and it’s not too expense. The big treat for us? Running into Dale T Nelson. OK< a bigger treat for one of us than the other.

Extreme Noise – Minneapolis
407 W Lake St, Minneapolis, MN 55408
Extreme Noise actually sells a lot of obscure bands and fringe genres that I really like. But to be fair, as soon as we pulled up Aine said – oh I remember that smell. They had bands play in the back.

Stop Six and a half

Treehouse Records – sadly they closed but we were in the neighborhood so I thought we’d at least drive by. 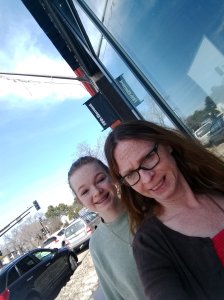 Fifth Element – Minneapolis
2411 Hennepin Ave S. Minneapolis, MN 55405
They feature a lot of rap, hip hop and some of the nicest staff around. There’s some great art and they sell a lot more than music, including art, clothing and books. We just missed the music. 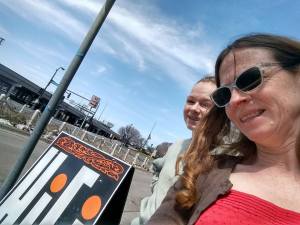 HiFi Records
1637 Hennepin Ave, Minneapolis, MN 55403
You can get a rock and roll haircut or by an album HiFi has everything. And they even had a very delicious lemony donut. HiFi is always a fun visit, they have a lot of great regalia around the shop. 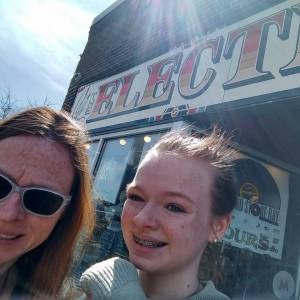 Electric Fetus – Minneapolis
2000 4th Ave S, Minneapolis, MN 55404
Electric Fetus is always one of my favorite stops with bands all day and special Record Store Day sale and specials. But it was packed, so packed despite the construction all around. This was a good year for me since I did not drop $70 on a dress this year there – but I’m not saying that I won’t go back later this week.

Barely Brothers Records – St. Paul
783 Raymond Ave, St Paul, MN 55114
This is another stop that we actually timed to see Erik Koskinen and Becky Kapell play. We used to see Erik Koskinen play once a month at the Real Phonic Radio show at JJ Hill Library. Aine pointed out to me that she has not seen him play  in years. He started playing “Six Pack of Beer” and her response was – oh fifth grade. I think she meant the song.

Caydence Records and Coffee – St. Paul
900 Payne Ave, St Paul, MN 55130
This was a first time for us to visit this record store and coffee shop. We liked it. I was a little bummed out that we really missed the music – especially the Bad Man who started after we left

So that’s us. Only 364 days until the next Record Store Day.