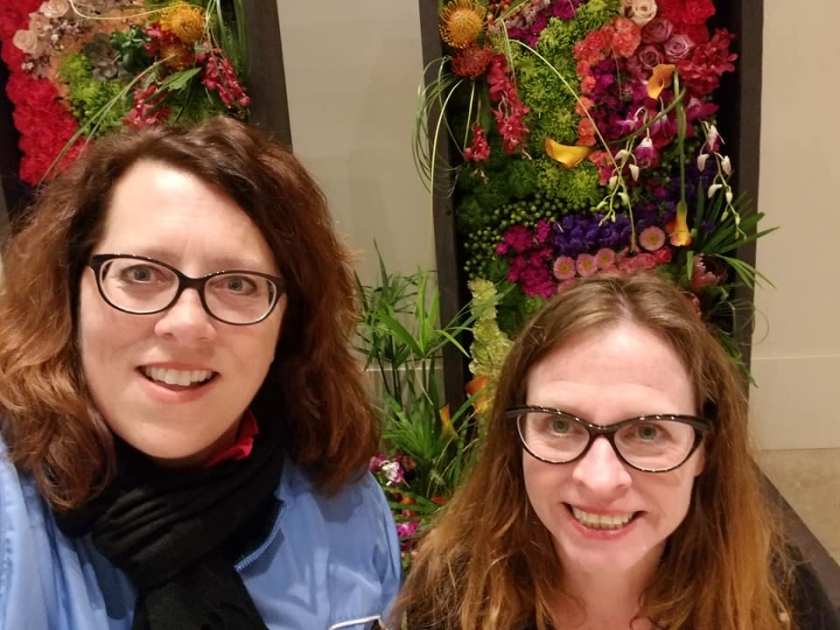 This week the weather went from 70 degrees on Monday to a snow, sleet, hail storm starting on Wednesday and continuing as I type. It sounded like the house was going to blow down last night. The only sign we had of spring today (April 11) was Art in Bloom at the Minneapolis Institute of Art  – one of my favorite events of the year.

For 36 years, Mia has invited florists to create arrangements to match works from the permanent collection. Some florists mimic the work in flower, some are inspired to do something entirely different but complementary. This year there were about 160 arrangements.  I figured the usual first day crowd (elderly) might be kept away by the truly terrible weather. And I was right. We found easy parking and the crowd was no more than a usual weekday – the flowers were at peak bloom! As an added bonus we got 3 miles clocked in at the gallery.

Here are some of my favorites…

Chrystal Odin arrangement with Kehinde Wiley’s Santos Dumont.
To be fair, this is my favorite work in the museum. I thought the white flowers were a bold statement but it made sense when I read the florist’s comments, “The artist Kehinde Wiley places black bodies in traditionally white spaces. My black body is often found out of place in traditionally white spaces. These days, just being a person of color is an act of protest.”

Alissa Nudi’s arrangement for Rafaello Monti’s Veiled Lady.
This was a more literal interpretation but I liked it. Maybe I liked it because while sharing the gloomy whiteness of the snow outside – the pink flowers brought s sense of spring.

Katherine Enge’s arrangement with Edward Coley Burne-Jones’ A Sea Nymph.
I like the shared shapes and spirit where the colors are close but not exact. Also I’m a sucker for a red head!

There were a couple of inside-outside pictures that I had to take because nothing is better than stark winter outside – muggy, flowery spring inside.

Wendy Dehkes and Cindy Soule’s arrangement with Jim Denomie’s The Delegation.
The vases seal the deal here. They have the same smile as the horses; not sure if that shows as well in the picture as it does in person. Even without that the colors are great and the wheatlike plants mirroring the headdress.

Finally Tricia Johnson’s arrangement with Joseph Wright of Derby’s Cottage of Fire.
The florist says, “Fire brings warmth, but also evokes fear.” I love that because the original picture is dark and the flower arrangement is so much happier and warmer. It’s a combination that isn’t mirroring but instead the flower arrangement grabs from different colors or maybe just contrasts to build a completely different story.