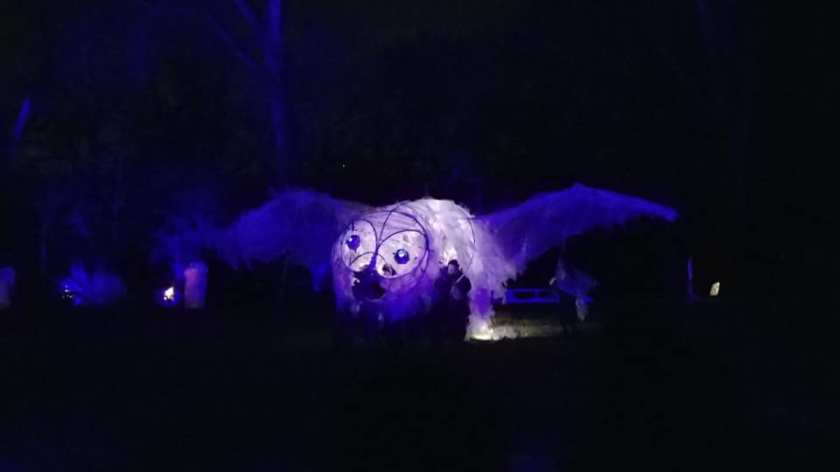 Every year the Barebones show down at Hidden Falls is one of my favorite fall events. They are celebrating their 26th year; I have seen maybe 10 shows. This year I went with Monica and Kevin. Monica and I got there so early we scored front row seats on hay bales. Getting there early enough to see the faces of the performers is worth it! And this year I got to help stack up bales for the seating – so I felt like I got a sneak peek and scoped out the best seats.

It’s a performance of giant puppets, dancers, fire twirlers, musicians and more. They creatively reuse and recycle materials to create amazing puppets and costumes. The owl was particularly impressive. The light plastic (like carrier bags) moved like feathers over a huge scaffolding. It took 6-10 people to maneuver the puppet. And from the front row we could see that occasionally the puppet spit out owl pellets that were actually small children. (How awesome!)

The show always follows a Halloween theme of life and death in people and nature. It emphasizes the need for people to take care of the Earth, especially if we think the Earth is going to take care of us. The action goes from bucolic to dystopic to resolved then renewed. Some years they try to create a story around that cycle but I think the show works best when the storyline is minimal and the themes hit you more like art or music than fable.

The music sets the mood. It starts the show it ends the show. There are sing-a-longs that engage the audience although the soundtrack is primarily instrumental. It’s ambient to rock. Because it’s omnipresent, it’s easy to overlook but for return visitors it sets the pace and for everyone it helps evoke a feeling. (The pace is important because it gets cold – and it gets cold before many of us have unpacked our good boots. So it’s nice to know where we are in the script.) The music has been more rocking since Venus de Mars has become musical director. She does an awesome job.

A lot of people pour a lot of time into this show. It is beloved and we thank you for doing it.