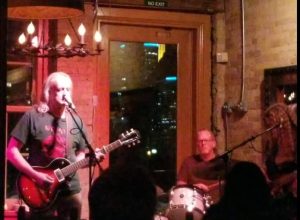 It was chilly outside but rocking inside Thursday night at the Aster Café with the debut album release of American Pleasure Dome and Ian George opening.

American Pleasure Dome is a four piece rock band from Minneapolis fronted by songwriter Hans Schumacher. And much as I love the Twin Cities, saying Hans is from Minneapolis is underselling his early connections to International Falls and travels all over the world. His songs draw from those experiences and a musical palette that includes rock, alt country and folk.

He opened with one of my favorite songs from the album, Bad Girlfriend. Last weekend, I had the unique experience of hearing Hans play a couple songs from the album solo while he was on the Mostly Minnesota Music Radio show; then we played the recorded version with full band. And days letter I got to hear the full band live. His voice low voice is captivating in each version but each layer of added instrument lifts the song up higher. I love the backstory of the song. It’s about a beer can in the fridge with a chorus of “rely on me” as the bad girlfriend walks out the door. Tongue in cheek, whether autobiographical or not, very personal and both mellow and uplifting at the same time. It’s going to be my new go-to bad boyfriend song.

I have to give a nod to an awesome version Sympathy for the Devil. Especially for an album release I think it’s wise to weave in a few well known and long loved numbers and when you have a tambourine played with a voice like that you can pluck from the audience- you have to use her!

Another favorite was Happy Pills. It’s dark but poppy. There’s a renewed 90s retro feel to the song. It’s comforting, but new. The band is solid with Lindsay Paine on Lead Guitar, Brenda Shepherd on Bass and vocals and Joel Arpin on Drums. Best of all for a live show, the energy was high and crowd was swaying with the band.

It was also a treat to have Ian George start the show with his psychedelic folks. I was delighted to get there just in time for one of my favorites from him – Kandinsky. His music is always dreamy. The sax was a great addition from the last time I saw him.

Mostly Minnesota Music is a weekly radio show on WMCN – we stream from 10am to noon on Saturdays. Or check out our archived shows.