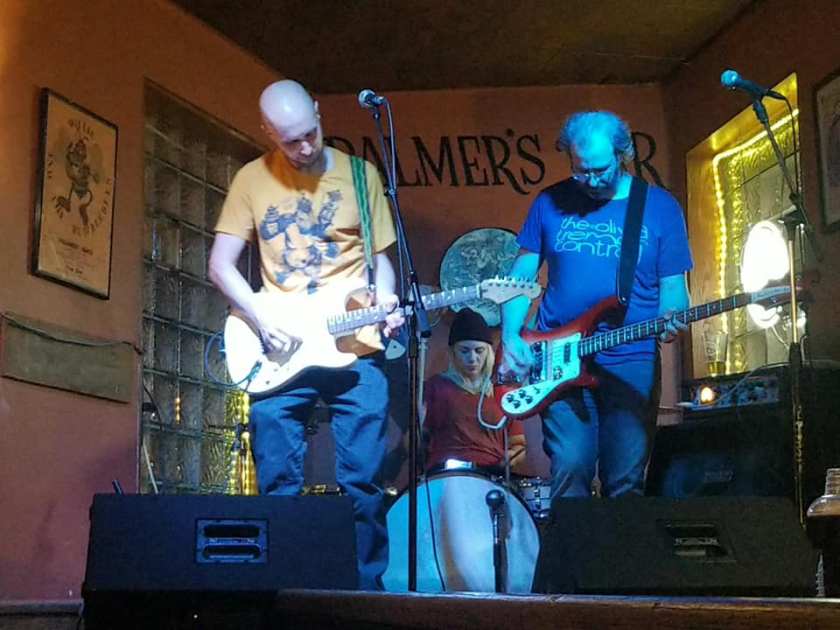 Wednesday night after a night of tech award glam, I headed to Palmers Bar on the West Bank to see The Dusty Tractors. They went on after midnight, which normally is a great time for me but seemed late last night. It’s telling of the lineup and the band themselves that I happily waited  and enjoyed the whole show.

The Dusty Tractors are a folky punk trio with Eric on guitar and vocals, Jesse on bass and Sarah on drums. It’s as if The Dead Milkmen and cast of Juno had babies who learned to play music. It’s fun and quirky but not gimmicky.

There’s something very honest about a cheerful drum, couple of guys on strings and charming lyrics. There was a line about maybe I’m not lazy but just saving up for something good. It’s a clever sentiment that’s half sardonic, half too true and runs through many of their songs.

Their last song was an improv recap of the night with a shout out to the bands before them, the bar and the highlights of the evening. Maybe they do a version of this at every show. (I’m likely to see them again and will report back.) But I have to say, it’s disarming and a great way to end the night.

Also on the bill, were Actual Screenshot and Control Planes. Actual Screenshots were driving but playful. Lots of 80s riffs, a strong rock and roll accent and anthem-esque “whoa oh oohh” vocals. Control Planes played heavy Dick Dale like surf wave in the background with punk foreground. I adored the unabashed love songs and I think there was a song about Space Invaders.

A night of nostalgia! There was a progression of punk transition happening with each band. It brought me back and for many of those eras I would have been sitting on a bar stool (or probably dancing) very near to Palmers!