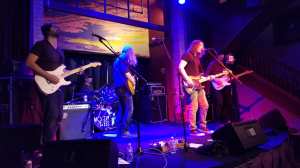 Mostly Trees released their debut album at the Hook & Ladder Thursday night. They have a long history of playing together in various permutations but this is the first under the name Mostly Trees. The band includes Jon Po on bass and vocals, Joel Korte on lead guitar, Dan Crowe on rhythm guitar and John Nelson on drums. The album was recorded by Nick Tveitbakk at Pachyderm Studios, with additional production provided by Ed Ackerson at Flowers Studio.

It a gorgeous album. The production levels are high. Such good use of synthesizers. There’s a dreamy undercurrent to the music. So I was surprised to see how rocking the band is live. And don’t get me wrong, the album is gorgeous but I really love live music.

They played the album top to bottom, which is always fun. The band is string forward. The live performance has moments of grunge hair band sound and visuals – think Pearl Jam where the recorded music is more Oasis. You can see how much fun they are having on stage and it’s infectious.

I’m a big fan of 22nd and 2. Specificity always makes songs feel more universal to me. I don’t know where 22nd and 2 is but I know the feeling of that place. There’s a wave in the melody that draws on the heartstrings. It’s a song that sticks with you. Seen It All is another favorite. It’s more upbeat, poppier and catchy. It’s lighter than many of the other songs. A nice contrast.

I’m looking forward to talking to the band on the Mostly MN Music on December 7. Maybe I can learn more about 22 and 2!