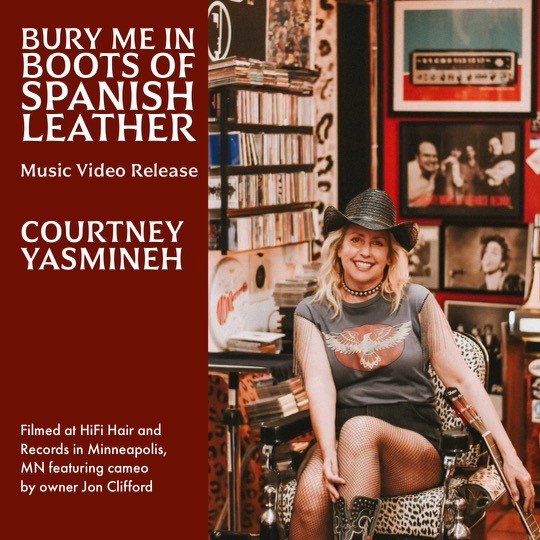 We are honored to premiere the video Bury Me In Boots Of Spanish Leather by Courtney Yasmineh off her latest album, Red Roses and Cowgirl Dreams. (Love her stuff like we do? You can help her get back to her hometown of Chicago to record new music. Check out her GoFundMe.)

We spoke to Courtney about her latest album last summer. Bury Me In Boots Of Spanish Leather was my favorite song back then and the video has just cemented that position. It is a love song to music and the people who make it with nods to musicians such as Bob Dylan, John Prine, Emmy Lou Harris and more.  It’s upbeat yet sentimental and it’s filmed at HiFi Hair and Records in Minneapolis, which is also upbeat yet sentimental.

There are Easter eggs, big and small, in the video for every Minneapolis music lover. First and foremost, a nod to Jon Clifford, owner of HiFi Hair, stylist extraordinaire and occasional gig manager. But we also see posters with Kiss the Tiger, t-shirts from the old 400 Bar, album covers with Bob Dylan.

Courtney’s voice has a joyous bounce and of course we get to see the famous Boots Of Spanish Leather!