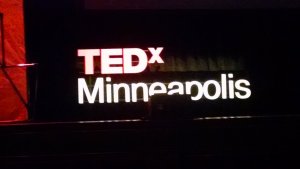 A TEDx event is an independently run event that sanctioned by the TED (Technology, Entertainment, Design) folks to use their format to host a series of short-ish lectures. Last night the University of Minnesota hosted one at the Tedd Mann. Here’s rough notes on the talks – with a special nod to Dr. Lindeke and his talk on sidewalks. As someone who tries to walk 10 miles a day, I appreciated his talk most!

Amelia Franck Meyer spoke about the need to reform child welfare. She pointed out that children at risk are often removed from their families and put into the care of strangers to ensure their safety. BUT what they often lost in the transition was a sense of belonging. That lack of belonging triggers a biological reaction that leads to hyper-alertness to stimulus and often causes kids to over-react – to understate it. Her thesis is that children can be save through therapy and finding a relative to care for them. Great idea – but I’m afraid it would make some systemic changes at a very high level of social support. I wonder if that sense of belonging trumps personal safety. Obviously not in terms of being in an abusive environment but say the grandma wants custody but does quite meet licensing requirements.

Dr. Cecilia Martinez spoke about the environment and the importance of hearing a range of perspectives when discussing the environment. She is from New Mexico and spoke specifically about how her heritage perceived the making and testing of the atomic bomb. As well as the different take on the atomic bomb as seen from the eye of someone who developed it and someone who was a victim of the bombing in Japan. She had a dancer perform while she spoke that demonstrate the impact of non-verbal story-telling.

Dr Desinieni Subbaram Naidu introduced us to the prototype for an affordable prosthetic hand. It is built with a 3D printer and the blue prints are (maybe will be) Open Source. The hand works through sensors that are attached, like a super adhesive band-aid to nerve ending through the fore arm. The idea is to create a prosthetic hand that costs $250 and doesn’t require surgery to work. We saw the hand work on stage. It’s amazing to think what an impact that will have on so many people all over the world.

Andrea Jenkins is a transgender poet who spoke about the history of the LGBT history, with an emphasis on transgender history. She spoke of her firsthand experience growing up knowing that she self-identified as a female long before the outward appearance caught up with that image and what it was like and is like for people in similar positions. She spoke specifically about hate crimes and the need to recognize human rights for transgenders for simple things – like bathroom access. She had a great time about just as all roses are flower, yet now all flower are roses the same I true that all transgender people are human but not all humans are transgender.

Dr. Bill Lindeke spoke about his research as an urban geographer studying sidewalks. We showed pictures that demonstrated the wide range of accessibility with sidewalks. If you think of it. We’ve all experienced it especially in Minnesota. Some sidewalks freeze no matter how often you shovel; they are uneven. Some sidewalks are built around trees, becoming inaccessible to anyone in a wheelchair or with a stroller. And some sidewalks are just more appealing than others. I travel a lot of small towns; I walk a lot. I think St Paul, especially near Mac Groveland, has great sidewalks with some community efforts to make then safer and easier to use and some residential efforts to make them more appealing – for example Free Little Libraries. When asked what he thought might help improve an interest in walking – Dr. Lindeke was quick to answer – Pokemon Go!

Dr. Keith Mayes spoke about the importance of using African American literature, history and experience to draw people into the classroom – especially at younger ages. His emphasis was on drawing in students of color although he recognized that a diversity in the standard canon would enhance everyone’s education. I have a unique experience here because I went to single-sex school for high school and college, which meant I studied more women than someone who went to coed institutes did. I’m not advocating segregated schools but I know that it’s powerful to learn about people who are similar to yourself. I can only imagine it’s even more powerful when everyone gets an opportunity in the coed, regular classroom to appreciate different cultures and be appreciated for their culture and perspective.

The nighg ended with am improve recap from The Theatre of Public Policy. It was a great way to reflect on the broad swath of talks.