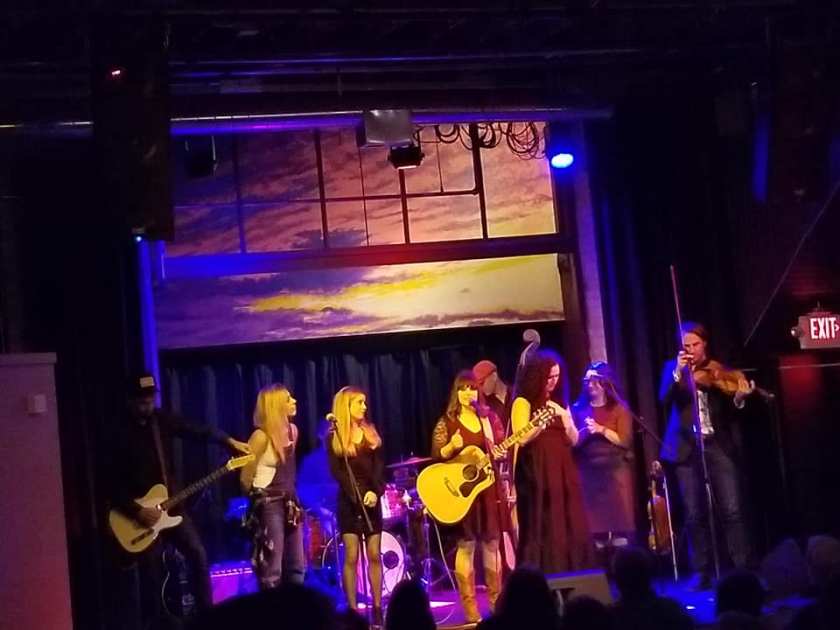 There is something inherently uplifting about an all-female lineup, especially when it’s a double CD release show. And it’s not just because I’m a big believer in girl power, which I am, but it’s the generosity in the room. It is seeing talented women lift each other up, be genuinely over the moon for each other’s success and helping out in any way possible from harmonizing to selling t-shirts. It’s watching women take over a field that has been traditionally male leaning and making it their own, understanding that we all do better when we all do better.

That being said – generosity doesn’t necessarily make for a good show – so I was happy to hear that generosity aside, the show rocked.

Mother Banjo (Ellen Stanley) started out the night with a song from her last album – the Devil Hasn’t Won. It’s a gospel song with an up beat. A nice drum roll of sort to herald in Ellen’s first album in six years, Eyes on the Sky. She explained that the song is about the days we’re living or maybe her place in that world or maybe both. A sentiment many of us are feeling but few can express in song. Ellen’s voice is measured and calm, a nice complement to the plucking of the strings in the song. Sarah Morris joined her on stage and their voices meld so beautifully. The song also showcases Ben Cook Feltz on the keyboard.

Ellen also does a great version of Linda and Robin William’s Together All Alone. It almost makes you wish for winter weather to be cozied up with someone special and not worried about the weather. Then there’s the counter to Together All Alone, a song called Water that harkens back to Goodnight Irene. It’s a slow summery song and Ellen’s voice is sultry and warm.

There was a musical interlude with Haley E, Rydell. I think we’ll be hearing more from her. Tough spot to be playing between two CDs releases but she held her own. I had recently seen her play in a “go vote toilet tunes” video (No explanation would capture it; but you can find it online.) and was glad to see her play live. 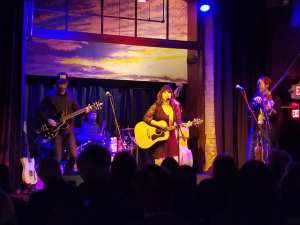 Vicky Emerson opened with Good Enough. She has a gentle voice that commands and demands full attention and it’s so worth the effort. It’s not a soft voice – just a voice that going to call you to where it is. It suits the honesty of her lyrics, which are unapologetically female.

But my favorite song, maybe of the night, was a slow, torchy version of Don’t It Make my Brown Eyes Blue, originally from Crystal Gayle. Vicky told the same story about the song that I would about remembering that song as a kid. There’s something so evocative to a kid’s ear; the colors I’m sure. But then listening to it as an adult, you really ask, is that all there is? Well, Vicky has put the musical punch into the song that you thought was there as a kid and you want to be there as an adult. It touched me.

The grand finale was The Reckoning, which brought up all of the musicians to the stage. They sounded great together and brings us back to the appreciation and generosity in the room. It’s nice to leave a show feeling good about everyone.