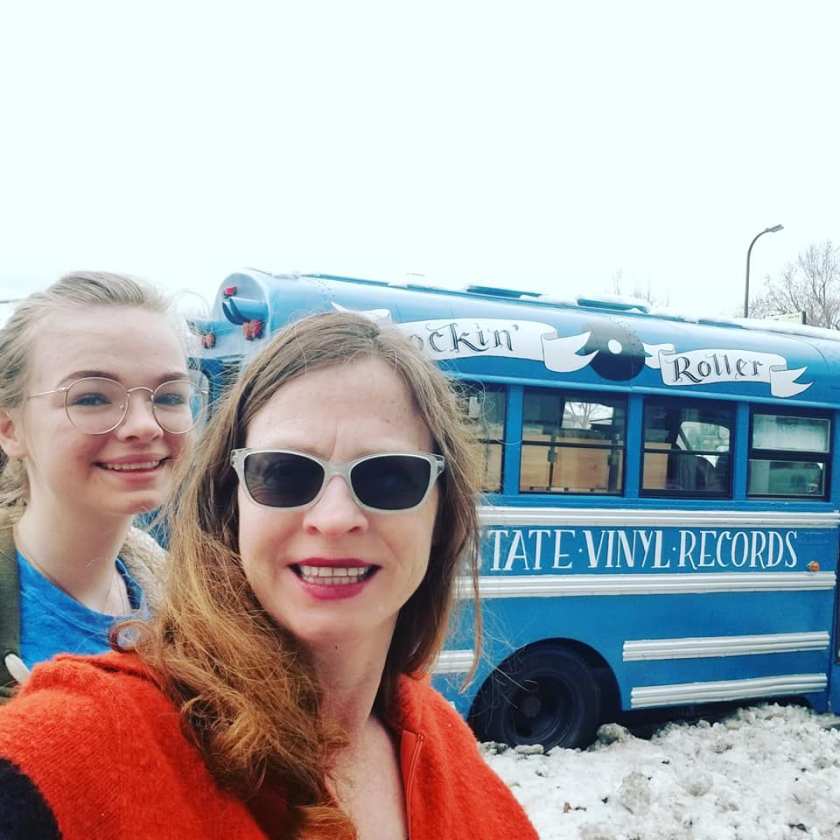 The annual tradition continues with my good humored 14 year old (mostly) happily trekking from record store to record to beat to try to top the number of shops we visited last year – which was 11.

I got some tech help this year by using MapQuest to track a route for use of 14 shops. Driving continuously that would have been a 2 hour journey. With stops it took about four hours.

Stop One: SolSta
We started at SolSta, formerly known as Solid State. It’s always fun to see their mobile (bus) unit of merchandise. And they always have a food truck, so it’s a good place to start. 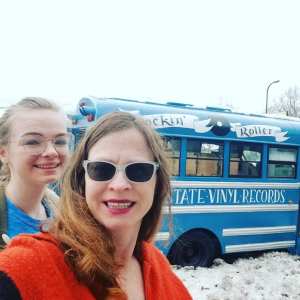 Stop Two: Moon Palace Book
OK, this was is off the RSD grid but they have live music regularly and sell books. SO it seemed like a good fit. They didn’t sell music but there was a vintage sale happening in the back – and Aine got a new pair of shoes. Also we got to see the End of the F***ing World graphic novel. It’s Aine’s favorite show.

Stop Three: Hymie’s
Hymie’s makes a whole block party of the day. They have music going inside and out, lots of sales and a great vibe. We were there early – but as soon as we walked in Aine was reminded some of past highlights (Chastity Brown).

Stop Four: Dead Media
Last year we bought a bunch of cassette tapes – this year we looked at a bunch. They had a deal this year when you take the #rosemarypledge and get a free plant. The Rosemary Pledge is an effort to “grow” sexual violence prevention. 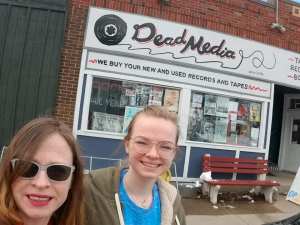 Stop Five: Rock, Paper, Scissors
This was a new shop for us. Very nice place. They had a deal where you bring a t-shirt and they will silk screen it. 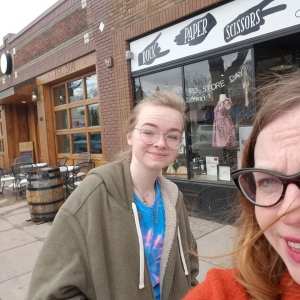 Stop Six: Know Name Records
Know Name has a lot of fun stuff to look at – and the best thing we saw there on Record Store Day was Little Man playing a set!

Stop Seven: Glam Doll Donuts
We’re counting them because we usually get a Glam Doll donut at the Electric Fetus, but we knew we were going to be too late for that!

Stop Eight: Cheapo Minneapolis
Super convenient – cheapo is a great place to go when you want to buy music. This is one of the largest shops we visited.

Stop Nine: Extreme Noise
Aine will never forget the smell of the first gig we saw there – teen spirit would be a cheerful explanation. But I love going to see all of the old school and new punk choices. And if we had been there when a band was playing, I would have gone to see it in the back room.

Stop Ten: Fifth Element
It’s a lot of hip hop but a really nice store. They had some art happening onsite. And sell a lot more than records and CDs. 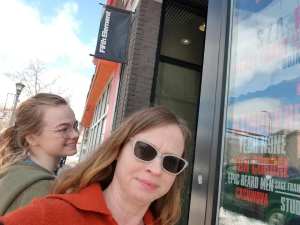 Stop Eleven: Hifi Hair
Great place for music and haircuts. The Silverteens played later in the day. (Hifi Hair has more music next weekend too.)

Stop Twelve: Electric Fetus
We were just in time to see 26 Bats – so that was good timing. The place was packed. I’m always tempted to hang at EF longer than we do – if only to get a chance to win any of the awesome prizes they draw for all day long.

Stop Thirteen: Agharta
Because Aine was getting tired, this was pretty much a drive by but we always like Agharta. Often they have treats!

Stop Fourteen: Barely Brothers
We ended our day at Barely Brothers. Often they have free beer in the back. That wasn’t such a draw for us – but we were just in time for Kiss the Tiger.