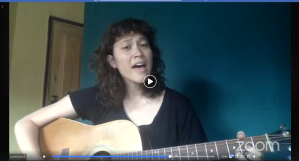 Friday morning I saw an opportunity to participate in a Facebook livestream performance that started at noon. It was a long week and a light Friday so I did it. I thought I’d probably half-watch it, the way I often half-watch things these day. But it was like stumbling onto a unexpected site specific performance in the real world. I stopped working, grabbed my teenage daughter and we both watched.

The performance, TOGETHER, included JuCoby Johnson, Nathan Keepers, Meghan Kreidler, Kurt Kwan, Jim Lichtscheidl, Kimberly Richardson and Peter Vitale. The performers had been working on a show that was canceled when COVID19 happened. This one-off, online performance was born of that opportunity.

There were monologues, videos, songs, a performance about the last civilian lighthouse keeper Frank Schubert and Haikus about bacon – all starting from the Brady Bunch view of a Zoom meeting.

It was like watching a brain on quarantine; familiar and foreign at the same time. Kwan’s jokes were what we call at my house “COVID funny,” which means they would normally get an eye roll but get guffaws now. Lichtscheidl’s foray into crafts was almost too close to the bone as we looked around at all of our abandoned projects of the last two months almost as crazy as his elephant sleeve. They were holding up a mirror and we could see ourselves but it made things a little more OK because it meant we weren’t alone!

But it wasn’t all funny. Richardson’s video of her playing with an imaginary friend in the alley is painfully touching; it picks up on the abject loneliness of quarantine and the faces we put on to make it seem like we’re not so lonely. The music (by Vitale) amps up the tear potential. Richardson continues with a whole segment on the lighthouse keeper. It’s funny and thoughtful. Here’s a man that chose seclusion and was replaced by technology. Richardson helps us see that the romance of such a life wears thin as you live it.

Kreidler sings Keep the Light On, building on the lighthouse theme and brings it closer to home. She has a beautiful, imploring voice. We could hear an ambulance in the background just as the song ended. Damn coronavirus can’t even let us enjoy a show about a quarantine without a cameo reminder.

Sadly the performance was a one and done. It’s almost cruel to write about it – except I wanted a chance to say that we need more online performances like this!