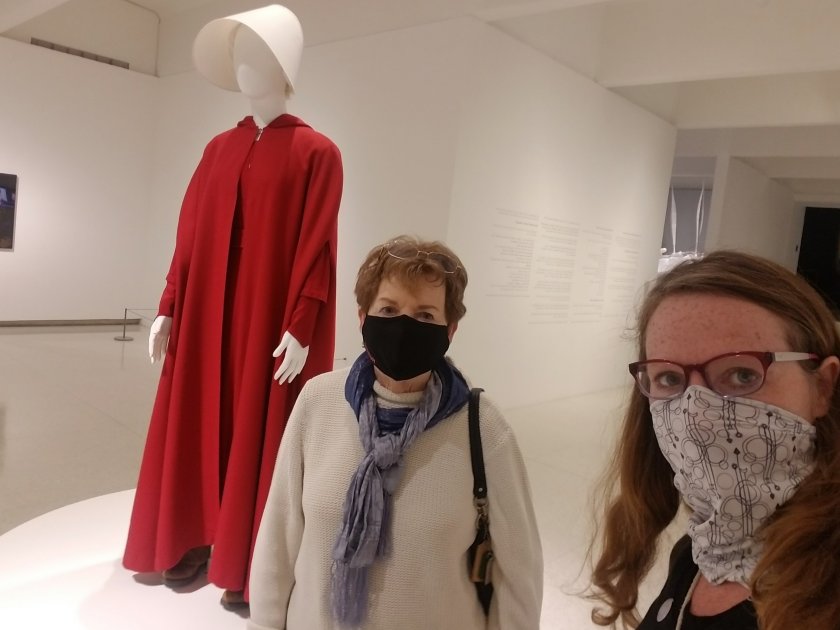 What does it say that I’m too squeamish to watch the presidential debate this year but loved checking out the often dystopian art at the Design for Different Futures exhibit at The Walker?

Here is a brief description of the show from The Walker…

The role of designers in shaping how we think about possible futures is the subject of Designs for Different Futures, a major exhibition organized by the Walker Art Center, Philadelphia Museum of Art, and the Art Institute of Chicago. The presentation brings together some 80 dynamic works that address the challenges and opportunities that humans may encounter in the years, decades, and centuries ahead.

One misleading comment is the idea that these views are all from the future; they aren’t. It’s like going to see an engineer’s version of Pandora’s box except it’s not tightly closed and you can see hope wafting away. And then you get to the next item and the future is so cool you can’t wait for the future to come. 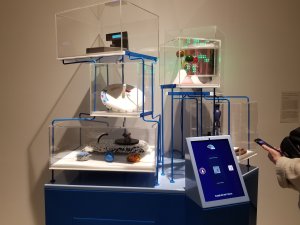 We started on a high note in the Labor room with the Catalog for the Post-Humans by Tim Parsons and Jessica Charlesworth. OK, the idea of post-humans doesn’t sound that positive but what they have is a collection of vendor machine oddities you can (theoretically) purchase to help you work smarter. My favorite was the Clickbaitwear; LED enhanced clothing that creates clickable content that emanates while you carry on with your day. Perhaps I find this irresistible because I feel like I often spend whole days producing content. The market plan that seems to put breastfeeding into the center of economic development was less appealing to me. Another person might feel exactly the opposite way about both. 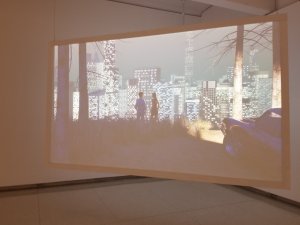 There were other scenes from the future of work and life. A movie about a developer who creates perfect soulmate based on a Hollywood starlet of days gone by. With VR (virtual reality) goggles the video shows the developer on “dates” with his creation. It’s Pygmalion meets Twilight Zone but presented during a pandemic, there’s a slight appeal to the story that was never there before. Juxtaposed to the driverless car, might have helped. A driverless car and pretend BF, I could be going places!

There’s a video (Estrofem! Lab by Mary Maggic) that plays like a Saturday morning infomercial called Housewives Making Drugs, showing transfemme stars who to cook up estrogen cocktails at home. It’s funny to watch but asks so many sad questions. Why would someone cook up a concoction from a cooking show that played like a KTEL commercial? Is it the expense? The stigma? The boredom? Or a growing fear of going to a healthcare facility during a pandemic is an added dimension. 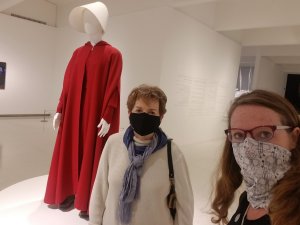 Ominous in the center of room is a costume from the Handmaid’s Tale, looming over us like a Supreme Court Justice selection. An example of life imitating art in the ugliest way. It make me wonder what it might be like to visit this exhibit with someone with differing views. Someone who doesn’t understand (or maybe care) that there’s a real problem when systemic racism causes technology to appear discriminatory. As is the case demonstrated by  Joy Buolamwini with AI, Ain’t I a Woman?, who responds to algorithmic bias, which the fact that AI systems often either mischaracterize or fail to recognize dark-skinned faces with a speech and showing demonstrations of misreading faces of famous black women.

A terrifying work was Synthesizing Obama Learning Lip Sync from Audio from Supasorn Suwajanakorn, Steven M. Seitz and Ira Kemelmacher-Shlizerman. The short description – the artists were able to use hundreds of hours of video of President Obama speaking to train their software to match Obama’s video to new audio. In other words, they could literally put words in his mouth. The creators don’t say this is easy but they do prove that it is possible and that is terrifying enough.

Another less terrifying but too soon work was the handshake assessment (Normaal by Mark Henning); it’s interesting and kind of funny but a little too real. The Pancakebot almost balanced out the handshake. The idea that you can print out food is amazing. I remember hearing about it 8 years ago at a TED conference; so not new but nice to see it spreading. The exhibit also reminds me of the Science Gallery in Dublin.