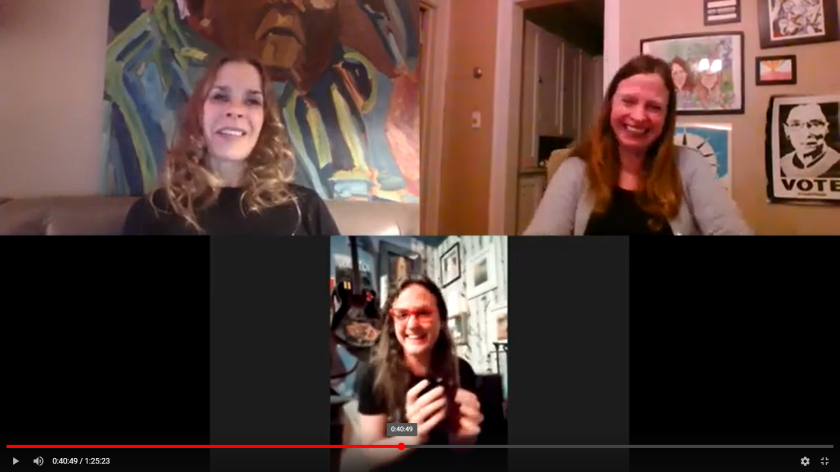 It might be easier to list what we didn’t talk about tonight with Doc about Theyself’s latest music release, their KFAI show Deserted Islands, the Twin Cities music scene, roller derby and more.

Doc is a performer – solo (Theyself) and collaborative (Elle PF). Doc lifts up local music through the weekly show on KFAI (Wednesdays 10am to noon) and setting up music and performance and teaching. Doc is involved with Roller Debry. Doc is a deep thinker working on lots of interesting (we may have even said “weirdo”) projects. You can support all of those projects on Patreon. So there was plenty of fodder for conversation. Also Doc is one of the people we really miss seeing on a night out on the town!

Theyself recently released lofi ambient work called roost. It is Doc on the piano, originally recorded on a phone, which broke. But somehow Doc was able to rescue a few pieces. Apparently the breaking of the phone left some imprints on the recording, in a way I might compare to knotty wood. It feels like it’s meant to be there as the listener and Doc decided to let those imprints stay. It is music to paint to – music to serve as an undercurrent soundtrack to your creative or pensive endeavor. A work for the year we are living, compared to their work last year wolf tower, which was an expression, or maybe an expulsion, of anxiety.

Doc is a music curator. Their weekly music show revolves around asking a music guest what 10 albums they would bring to a deserted island and Doc matches that collection with complementary tunes. That is some dedication to an art! They bring the same passion to live shows they curate blending bands that marry well and contrast interestingly.

And then we talked about music, performance, video and roller derby. About the love of music and especially of the Minnesota music scene.