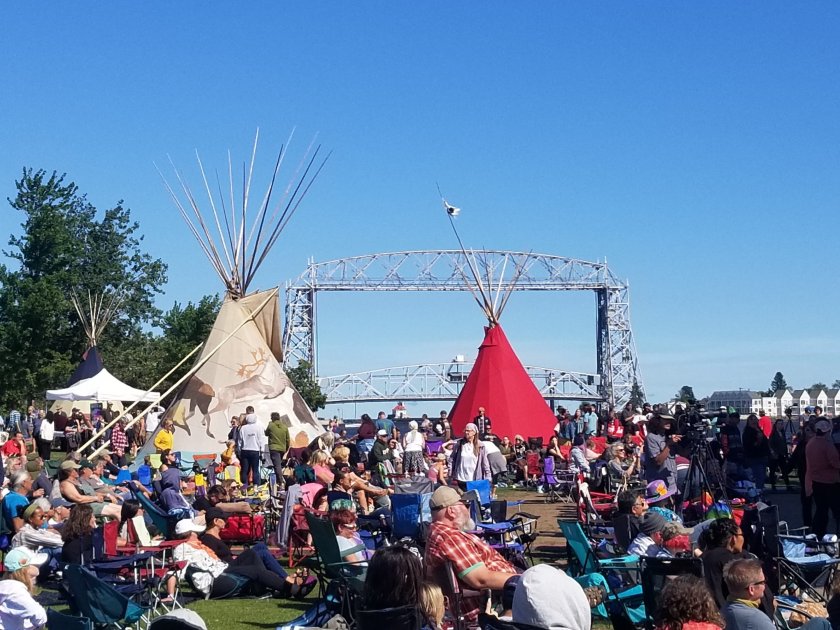 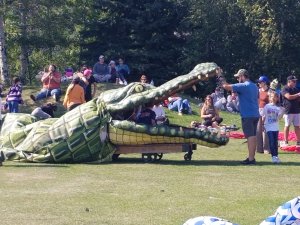 Water is Life is a daylong festival that raises money and awareness for water protectors such as  Honor the Earth and Giniw Collective, who are working to save water for us all by stopping Enbridge from building more pipelines. Often you will hear about them and their members getting arrested for chaining themselves to construction equipment or otherwise putting themselves in physical and legal danger to stop the pipeline builders from working. (Part of the funds raised will help pay for legal fees for those water protestors that have been arrested.)

It is also an amazing music and arts festival that lifts the voices and talents of Indigenous artists and performers. This is my third year at the festival. It has grown exponentially – both in terms of artists and audience. It takes place under the shadow of the drawbridge in Duluth; you can see and often hear the large boats passing the canal. There are two stages and I caught all but the first performer, Annie Humphrey, whose perspective as a Native mother I was sad to miss.

First step in we have the beautiful ethereal sounds of violinist, Gaelynn Lea. Her voice is beautifully haunting. Gaelynn is also a prolific speak on disability rights and accessibility in the arts; she is generous in providing information from a unique perspective. Playing on a large stage adjacent was Corey Medina & Brothers. Corey’s voice booms and shakes the ground awake. They did some songs that specifically highlight the Native (and two spirit) perspective and the importance of embracing your perspective in and out of the community. Touching and rock-danceable are hard to pull off simultaneously – but they did! 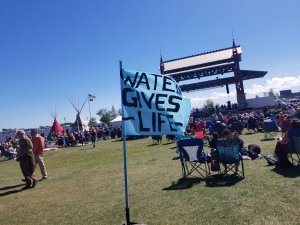 David Huckfelt, Keith Secola. Joe Rainey Sr and Low took over the campground for the middle section of the day. While they each had their own set times, they are so intertwined as community that the time and space seemed to morph together. (Technically, Low played a set after the others but I’m taking artistic liberty.) The sense of community deepened the music and made the event even more special. The stage was full of The Book of Life, NDN Kars, traditional songs for a hot minute I thought Low was going to go full on Noise. It flowed like maybe summer was never going to end, like we could enjoy that minute forever.

They brought up so many artists, which is an opportunity to see new people or people in new positions supporting and/being supporting by someone who is also in a new role. It’s an egalitarian way to keep that flow going. A nod to Liz Draper, who must have the record for most sets on stage. I hate to try to list others, since I know I will miss folks but a few highlights include: Thomas X, an exhilarating Native rapper who has done a TEDx talk, Dana Thompson, who is involved in Native cuisine restaurant Owamni and Gary Famer (aka Uncle Brownie if you’re a Reservation Dogs fans – and if you aren’t get on it!) on harmonica. D’Pharaoh Woon-A-Tai (Bear from Reservation Dogs) was also on site, encouraging Indigenous to go into the arts and being so generous with selfies with adoring fans.

The day ended with a powerhouse of women performers. Tia Wood closed out the scheduled events on the side stage. New to me, she has a sultry voice with heart that feels older than her years. The vulnerability in the music highlights her strength in letting us hear it. Dessa came out with her own brand of strength. Few people know how to use a stage the way she does. Her music is impeccable, but the beauty of seeing her live is that if you’re near the stage at all, it will feel like she sees you. And a nod to the genuine nature of seeing people, she was signing autographs and chatting with folks after her performance and into the night.

Been a few years since I’ve seen Ani DiFranco; she was all that was and so much more. Women still toss bras onto the stage and now more than ever, Ani sings about the power of women, the need to hold ground and demand more. Consummate professional, Ani kept going even when there was a tech issue; subsequently we were able to hear her recite a song like poetry. Her voice is amazing but it was powerful to hear her words naked. The grand finale was the Indigo Girls; they cofounded Honor the earth with Winona LaDuke. Their music kept us warm on a night that reminds us that Duluth is pretty far North. Couples were cozying up. Lots of folks were dancing and everyone was singing along. It was like summer camp with much better music. 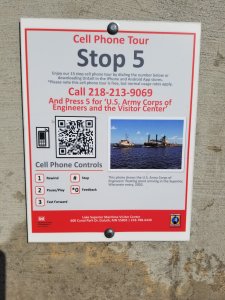 It was the perfect end to summer and a reminder that we can’t take ideas like summer on Lake Superior for granted. Our Earth is hurting and in danger. Time to join organizations, such as Honor the Earth to protect the water because water is life! (You can volunteer, donate or just keep informed and share updates with those around you.)