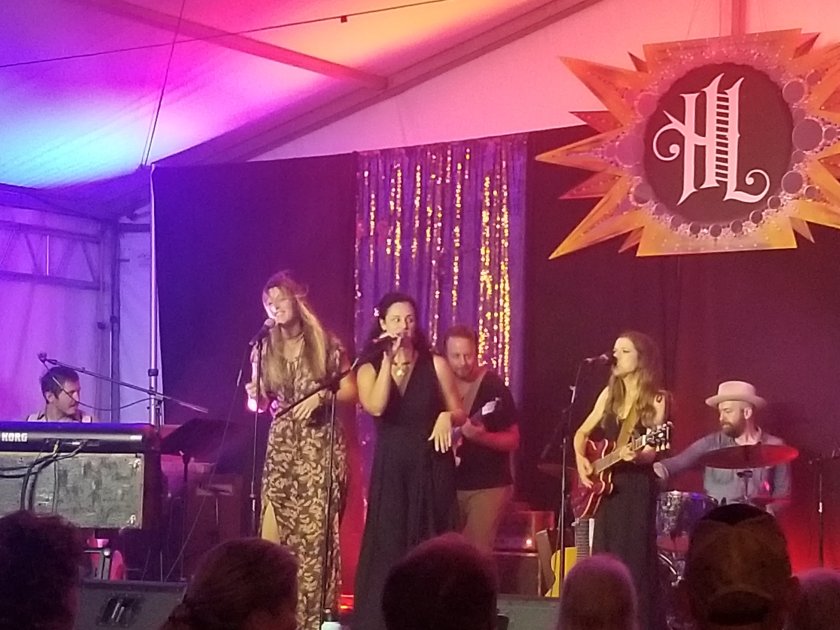 Sarah Morris, Annie Fitzgerald and Maygen and the Bird Watcher played at The Hook last night. You know the outdoor show has approval from some higher ups when within a minute of ending there’s a huge thunder clap and a tiny monsoon of rain. The thunder may be hyperbole but the rain came down cementing the magic feel of the entire evening.

A highlight was getting to see all three women play together. That is what we have been missing for so long the planned serendipity of an awesome lineup and the hope they’ll all jump on stage at some point. I rarely post videos from shows, since I am not a great videographer but I have to share this joy.

Maygen (Lacey) and the Bird Watcher began the night. The full band wasn’t there but even to get a taste of what they can do. We got sneak peek at Full Moons, a single they have just released this morning. It is delightfully blue grass. It was a toe-tapping balance to Antidote, which is another lovely song but more solemn. (We featured the Antidote video las month.)

Annie took center stage with her full band and Sarah doing harmony. This was the first time the full band has played since the pandemic. From off stage it felt as easy as getting back on a bike. They sounded great. She played a few songs from last album (You & Me at the Sun), which are perfect for a summer show. Be Like a Tree is always a upbeat crowd pleaser. Hero, from her first album takes on such new meaning post-pandemic. She poignantly sang it solo. She also played one of my favorites, I Know that Sound from the #METOOMPLS album. (We had a chance to talk to Annie and Sarah about the #METOOMPLS album last summer.) Annie has such a strength in her songs; it was great to see it again live on stage.

I have seen Sarah play since the pandemic but not with a full band. It was fun to hear old songs and new. I especially enjoyed the songs from her latest EP (Between Here and There).  I loved the songs when listening from home and enjoyed talking to her about them earlier this summer. Listening from home I really concentrated on the astute lyrics and all of the emotions. Listening live, it’s all about the music; the sounds will engage and capture you. Yet, there’s still a feeling of intimacy like listening to the idea of interdependence that gave birth to I Need You or the backstory of how the accordion found its way onto the album.

To misquote Sarah’s Between Here and There, the show was “almost maybe too much to hold” as we sit in a limbo of new pandemic reverberations. I am glad that we had a night of beautiful music under a summer sky together.